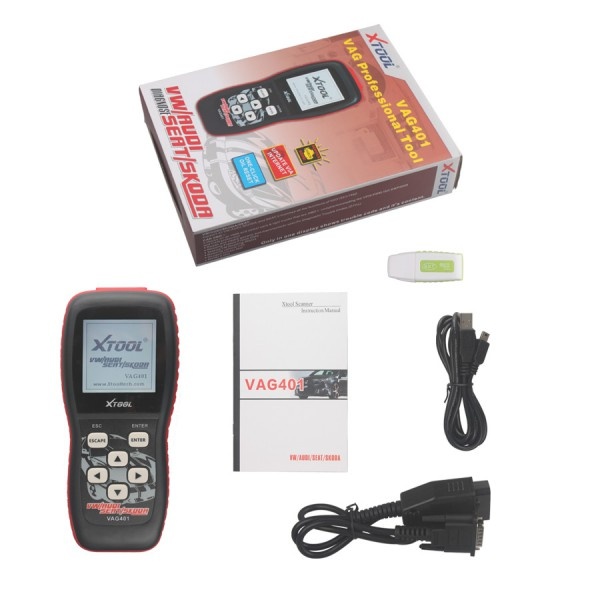 – I did try using Xtool VAG401 to activate my fuel pump (2013 JSW TDI), as though replacing a fuel filter. With version 8.41 of the software installed on it, when going to Engine/Basic Settings/035, it runs the pump for about a second and then the pump clicks off. It would seem there’s a bug in that version.

– xtool vag401 reads the same codes, shows the same measuring blocks, activates the same output tests, etc., as VCDS. I would not at all want to try long coding with one, but for diagnostic use it seems to be entirely adequate. The choice is not limited to “VCDS or generic OBD-II”.

– A small standalone device like a VAG401 is simply more convenient for simple jobs–reading codes, checking measuring blocks, maybe changing a fuel filter (mine doesn’t seem to work for this, but others’ do). And, of course, it’s considerably less expensive.

– VAG401 will pull VW-specific codes. These can be more specific than the OBD-II codes, as the latter are a standard set of codes used by all automakers. The VW codes also, as I understand it, cover control modules that don’t register OBD-II codes (for example, I don’t think you can use an OBD-II reader to pull codes from your radio, but you can use a VAG tool for that).

The VAG401 claims to be able to do pretty much everything VCDS can do. It can read codes, clear codes, read measuring blocks, do output tests, code modules, etc. But it doesn’t have anywhere near the UI that VCDS has. For example, the TDI timing graph tool in VCDS is great for timing your injection pump after replacing a timing belt–I wouldn’t want to do that by just reading numbers on the screen, but numbers on the screen are what you’d get with a VAG401. VCDS has a long coding assistant, breaking out multibyte module coding into individual, documented bits. I expect (haven’t tested this yet) that the VAG401 will do that coding, but you’ll need to look up the bit/byte locations yourself, and calculate the binary/hex conversion.

OTOH, the VAG401 is under 30GBP from www.obd2shop.co.uk, while VCDS starts at $250. The VAG401 is a compact, lightweight, standalone device that doesn’t need batteries (it’s powered by the car when you plug it in). If all you want to do is read codes on occasion, I’d think it would do fine for you. I’d suspect it would do better than the Torque/bluetooth dongle approach, due to its ability to read the VW-specific codes, though it will cost a bit more.

– I know this is going against the grain (a lot) but I bought a VAG401 about a year ago. It is a low cost Chinese crap of a tool, but I now use it all the time.

There is one HUGE caveat – I ALREADY KNOW the channels I need to get to. So, for me, I hit basic settings or measuring blocks and know what channel to enter to get to the data I need. The VAG401 labels are TERRIBLE, so channels are often mislabeled, but, I don’t care since I know whats what.

However, I LEARNED all these channels on my VCDS tool, so, really, I couldn’t do what I do with VAG401 without VCDS. VAG401 is OBDII powered so I don’t need to boot up a laptop/smartphone to get DSG transmission temp, or prime a fuel filter on a common-rail etc. For basic service the VAG401 does what I need and is faster to use, but you *STILL* need a VCDS if you are going to do anything complicated. Finally, the VAG401 is super cheap so I’m much less worried about crunching it on a door, dropping it etc. versus dropping a laptop.