How to Unlock Lonsdor FT01 smart key?
The concept of unlocking: Toyota smart key, once been programmed to a car, it cannot be programmed to another car, unless been unlocked.

Unlock steps:
1. First press and hold the 1, 2, and 3 buttons at the same time (according to the order shown in the following figure), after the indicator is on, release the 3rd button.
2. Keep pressing the 1st and 2nd buttons. After the light is off, press the 3rd button again. Then the light is on and releases the 3rd button.
3. Repeat the second step 10 times or more until the indicator light flashes continuously, then you can release 3 buttons.
4. After the indicator light stops, the smart card is unlocked and can be used as a new card.
5. If you do not understand the above steps, you can refer to the attached video 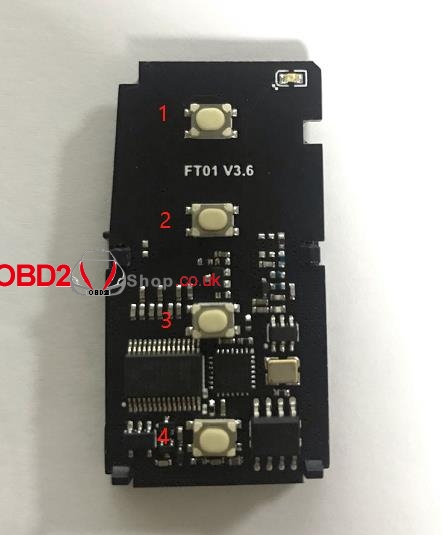 Procedure:
1. Remove the button battery of the smart key

3. Select corresponding vehicle type option and operate according to prompts

Remark:
For those smart keys version under V02.53, have to remove the battery to convert successfully.

For that version higher than V02.53, to remove the battery or not doesn’t have any influence to the process.

How to Update the FT01 Program?
Enter “Special Features” → “FT01” → “Get Version Information” option to get version information of Toyota smart keys.

For those versions higher than V02.53, no need to update the program.