Here is SuperOBD SKP900 key programmer reports what works on what models I tested. 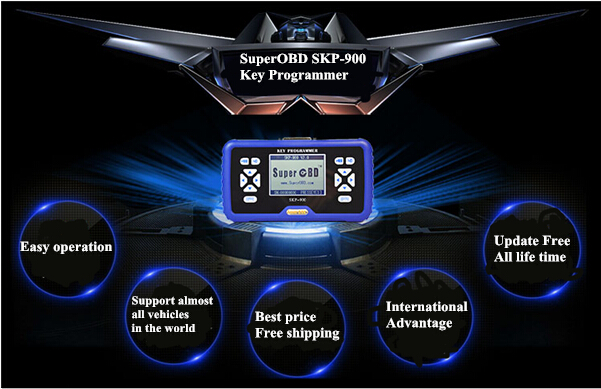 SKP900 can do all keys lost with every car mentioned as follows:

Kia in USA is transponder optional and most do not have it still. SKP900 is to program the remote.

This car used a flip key.

UK models and other area models———–

program smart key for ford explorer with all key lost.

Toyota landcruiser 2009 add key ok. In adding key USA and Europe toyota are the same way ,it on all keys lost that they are both totally differents !
One can be reseted by OBD and you can do also OBD for some kind of toyota europe but there is a risk to corrupt dump or steering lock ,for europe best solution in my point of view is eeprom and dump way.

transit mk7 does them in seconds, both with and without working key

I did hyundai i20 after the update to v4.5 and it was fine

What not work on what models:

2013 Brilliance Jin Bei H2L will not program key , or reset immo or replace ecm , plus wrong pin code extration too

the juke and qashqai from 2010+ for Keyless, and with ignition lock types! –not so good.

Ford connect add key is not on the menu

I read pin code for vw Bora 2000 year with SKP900 but faulty. then i read with SBB, pin ok read and program the key OK.

Here a real user’s experience, I think it is helpful:

I have one superobd SKP900 of these. for certain cars works great, others… meh

I find for VAG cars superobd SKP900 is a waste of time. for the older ones i use a clone SBB, cheap as chips and works great. For the newer ones needing dealer key, abritus.

I have done a number of kia/hyundai and some remotes, all perfect, but on newer cars with 80bit 4d chips needs pin.

i use SKP900 machine when i program peugeot/citroen remotes, or recode keys to eliminate a lostkey. Works great for psa, exept you need pin. (seperate pin reader).

tried a few hondas, only the newer ones seem to work.

my experience is, older cars use a tool like SBB, and where that one stops working, SKP900 takes over. (exept vag/bmw/benz)

granted that the menu system leaves alot to be desired. unlike other machines where you would go into brand, then model, then year etc.. this one is brand, then for example immo 1, immo 2…. just acase of trying one then the next etc… gets the job done but tedious.